In this Mars Request for Comment (MRC-0) the authors propose a standardized process for governance proposals related to the Mars Decentralized Credit Protocol (Mars). After gathering feedback and finalizing this proposal, we recommend that all future proposals adhere to this Mars Improvement Proposals (MIPs) Framework.

Governance proposals may cover any topic related to Mars; however, the exact nature of these proposals–and the consequences of an approval or rejection–will vary depending on the category and topic of the proposal.

So, there are two main categories of Martian Council governance proposals:

The following timeline shows the proposed flow for protocol modifications: 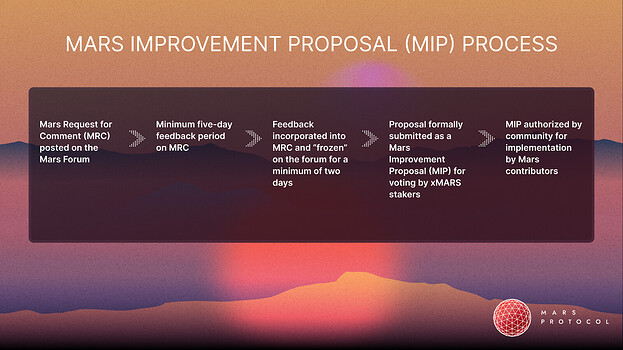 MRC-0 defines the Mars Improvement Proposals (MIPs) Framework for all subsequent MIPs to utilize. This MIP is the foundational MIP that provides the necessary templates, processes, and guidelines for working within the framework and defines the key roles required for the operation of the MIPs Process.

For Mars to successfully operate as a fully decentralized and self-sustainable DAO, a formalized process of decision-making is required. In a permissionless protocol, everyone should be able to propose changes and improvements.

The MIP Framework serves to empower each Martian Council participant by giving them a standardized way of interacting with the wider DAO and defining its future shape.

There are two main categories of Martian Council governance proposals:

There are four potential categories for MIPs:

Each category has specific considerations and requirements as detailed below.

Certain proposals for changes to certain configurable aspects of the Mars Smart Contracts (binding), which can be modified directly by on-chain votes, or code changes to the Mars Protocol (signaling), which require upgrading the protocol. Technical MIPs should be formatted per the Technical MIP Template.

A general category for proposals that do not fall under the above categories. General proposals can be sub-categorized in accordance with their various topics and should be formatted per the General MIP Template.

In order to submit a MIP on-chain, the MIP submitter must call the submit_proposal function from the Martian Council contract. This can by interacting directly with smart contracts or by using the UI at marsprotocol.io and specifying the following parameters:

A MIP can be resubmitted for an on-chain vote up to 3 times without having to go through phases 1-4 again if it failed to pass due to legitimate external reasons (e.g., potential low governance participation that did not meet the minimum on-chain quorum)

Since dependencies carry over, a MIP with defined replacement target must strictly adhere to dependency requirements and interface correctly with MIPs that depend on the replaced MIP.

Externally referenced materials are not MIP content and are not ratified when a MIP becomes Accepted unless it is explicitly stated otherwise in an MIP Component specification.

MIP Editors enforce the administrative and editorial aspects of the overall MIPs process and program.

Specific authority of the MIP Editor(s) in MIP0 processes

A MIP Editor’s responsibilities include:

MIP Editors can correct issues themselves, but they are not required to.

Feedback on MRC-0 will stay active for at least 7 days (5 days + a 2-day editing freeze on the proposal’s language). If the community signals support for the proposal, Delphi Labs will submit it for an on-chain vote. Should that vote pass, Mars will use the governance framework as the recommended model for all future upgrades. Additionally, of course, we encourage further discussion and suggestions on the same topic.

This proposal is being made by Delphi Labs Ltd., a British Virgin Islands limited company. Delphi Labs engages in incubation, investment, research and development relevant to multiple ecosystems and protocols and was part of the joint venture which researched and developed the Mars Protocol. Delphi Labs is one of several entities which associate with one another under the “Delphi Digital” brand. Delphi Digital’s associated entities and/or equityholders or service providers of such entities hold MARS and may have financial interests in this proposal. Such entities and persons may also have financial interests in competing projects or ecosystems.

As usual Delphi proves what real VC’s are/should be all about, constantly adding and trying to implement new thing for the benefit of the protocol.
Fully support, you never cease to amaze me with your commitment!
Full support it

Excellent. Thanks for the feedback!

Thanks for the great feedback!

This is an impressive framework for MIPs, written professionally, and fully supported at every step. Hats off to the author(s) and the team!

This is a very strong signal to the Community of the caliber of things to look forward to with Mars Protocol.

This is quite an impressive piece of work. I support this framework, well done team

I have one question though. Is there a plan in place for when the amount of lock-up of MARS for proposals will be lowered? Any metrics or thresholds that will have to be met before Delphi deems the protocol ready to be community driven?

Thanks, and i’m looking forward to follow the development of the protocol